Stand up, writer, and musical improviser

“Now take, say, maybe the biggest problem we face: destruction of the environment. Every Republican candidate is either a climate change denier, or a skeptic that says they can’t do anything about it. What they are saying…is ‘Let’s destroy the world.’ Is that worth voting against? Yeah.” – Noam Chomsky on voting for Hillary Clinton over a Republican

Ever since Super Tuesday Part 87, I’ve been surprised how many of my smart and well-meaning friends are dead-set against voting for Hillary Clinton, proclaiming they’re going to vote for Donald Trump instead. Kindly, may I suggest: DEAR LORD, NO!!! They are not sexist (for the most part), they’ve just been so over-exposed to Hillary’s many negatives, it’s hard to comprehend how Trump could be worse. I also don’t want another Imperialist, works-mostly-for-the-business-class President, but Trump is similar or worse in nearly every regard: Trump is pro-fracking, pro-stealing other countries resources, has a history of bankrupting things for his own benefit, has no environmental policy at all, is both implicitly and explicitly racist…

But don’t take my word for it, listen to brilliant US-critic and Bernie supporter not-just-because-they-look-alike Noam Chomsky:

Chomksy also posits the novel idea of voting for whoever you want in safely blue states, as long as we bite the bullet and vote for Clinton in the swing states. We won’t win by voting for Trump and blowing it up. Begrudgingly vote for Clinton, protest her policies that are corrupt and allow those that aren’t. Keep learning and vote in your local elections.  And remember, if Bernie doesn’t run Third Party, its because of how dangerous Bernie Sanders thinks a Trump presidency would be.

A group of retired auto workers is having their morning coffee.  They pushed two tables together without asking.  When you buy coffee and a corn muffin, you can redecorate, free of charge.  They’re all white because I’m in North Chicago.  They all have accents as if they do part-time work coaching amateur local sketch groups on the correct pronunciation of “Da’ Bulls.”  The coffee shop is run by a 60 year-old man, and has 60 year-old man features: card tables, folding chairs, table cloths.  You can tell a cafe is modern when the tables are nude.

Their conversations are what you’d expect: whether or not leasing a car is a scam; bragging about being a loyal Round Up customer (“I’m just sayin’, come to my backyard—no dandelions.”); arguing that the mother of 4 year-old boy who caused a gorilla to be shot was negligent because she clearly didn’t hit him enough. In a middle of a conversation about how “rare” it is to find women of both beauty and intelligence, they started discussing how poorly women are paid in the auto industry.  They all agreed it was an injustice, then moved on to talk about how badly the church needed to be painted. Technically, this is progress.

I was spanked as a child, but it hasn’t affected me. Although, (this is silly) I don’t pat the bottom of a glass ketchup bottle to get the ketchup out, but instead jab a knife in its mouth while scream-crying “Fuck you, Dad!”

Hillary: We’ll defeat ISIS with a no-fly zone!
Advisor: …ISIS doesn’t have planes…
Hillary: They could! And they won’t be able to fly them in my ingenious no-fly zone!
Advisor: …Assad has planes.
Hillary: Who? Syria’s dictator? What a coincidence! lol!
Advisor: You’re not still trying to overthrow a regime to stop terrorism, are you?
Because in Iraq, Afghanistan, Libya, we’ve only made things worse in the vacuum of pow…
Hillary: NO-FLY ZONE!!!
*Adding cinnamon to my iced coffee*
Stranger: Do you like it like that?
Tom: No, I’ve been procrastinating and this is how I punish myself.
Stranger: Really?
Tom: Oh no! Sorry, I was just joking.
Stranger: Oh. That’s a very specific joke…
Tom: Well, I’m quite good. 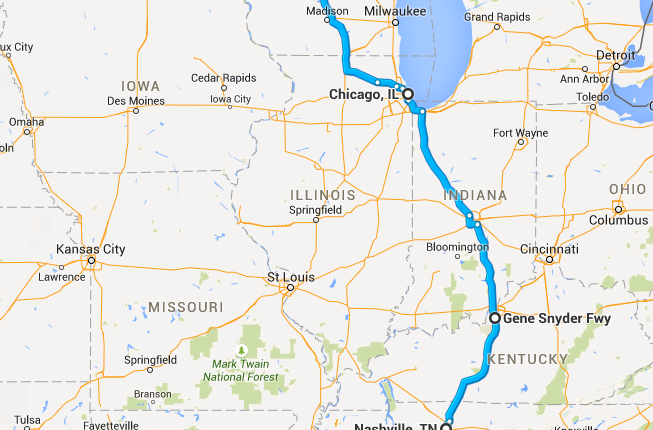 I’ve traveled a lot the last week.  I finished up in Atlanta on May 25th, spent the 26th in Nashville, the 27th in different parts of Kentucky, the 28th-31st in Chicago, and I just got to Minneapolis an hour ago.  I had been having car trouble of unknown origin, and was planning on coming back to the Northeast to get it checked by a friend.  Then the battery died, forcing me to find out the problem was exclusively the battery.  With the car clearly working, I made a last minute dash for Chicago, and I’m glad I did.  Chicago’s great, and I want to spend a lot of time there.  So why am I in Minneapolis?

Upon getting to Chicago, I asked for my Instacart account to be switched to there.  It was, but not in time to pick up any shifts until this Sunday.  Therefore I have a week where I can’t work…and I want to utilize it for fun!  That’s how you know I overthink things, “No work…I should use these days for the utilitarian purpose of enjoyment!”  ACME Comedy Club in Minneapolis has an well-recommended Monday open mic I thought would be perfect to check out.  But also I thought, “It would be stupid to do drive a 900 mile round-trip for one open mic.”  But then I noticed Shane Mauss, one of my favorite, not-well-enough known comedians, who I haven’t seen in years, was performing all week, and thought, “It’s a sign!”  And by “sign” I mean “a 900-mile excuse!”  Also, on Wednesday there’s supposedly some great open mic in Milwaukee I will check out on the return trip, and I might go to visit family the day after that.  But then it will be working in Chicago until I feel like leaving, which could be mid-June, or it could be early September (probably mid-June).

“But Tom, how will you couch surf that long in one place?”  I’ll get to that question next post!  Either way, while emotionally it’s been up-and-down, I love living like this!  I love that 5 days ago I was passed out at 5pm in my car in Kentucky because the Bourbon Trail was too generous!  And today I’m in Minnesota!  And Instacart has given me an Executive Membership to Whole Foods, so 25% of my diet is free samples (they have A LOT of free samples)!  So as of right now, I’m very proud of what I’m doing, and enjoy doing it!  I’ll probably bomb at this club and be sullen later!  Yay!!! I’m posting this because, firstly, Jenny Zigrino is very funny and this is one of the better first late night sets I’ve seen in a while. Secondly, Jenny was one of my most used performers back when I ran Grandma’s Basement, and she was going to be successful regardless, but I’ve been happy to watch her rise the past 6 years. Ladies and gentlemen, Jenny Zigrino on Conan:

Weirdly, couch surfing is more restful than living in NY, where there’s traffic, and hissing pipes, and clanking metal, gunshots, drunk kids yelling, drunk old dudes yelling, raccoons going through your trash, bottle-seeking old asian ladies going through your trash, people selling illegal fake purses outside your window, Constant construction…coma-inducing heat because its summer and you can’t afford AC, freezing temps because your landlord died in February and they left the least amount of heat on for you and the roommates who were left behind, dogs barking, cars backing into parked cars and then screeching away….trash being picked up every day, your roommate making food at 2 am right outside your door because you don’t have full-time access to the kitchen so there’s a microwave in the hallway…you get it.
If I’ve learned anything so far, its that I need to be around supportive people.  Because I don’t really like my sets unless they’re one of the best I’ve done.  I’m not happy with my stand up like 90% of the time.  So while I learn perspective, I really need other people to be minimally supportive, or occasionally say they liked something I did.  Otherwise I just sink into wondering if I’m funny or ever was.  And logically, I’ve lived long enough to know I am funny, I’m just less good at crowd control, confidence, performance, you know, being a paid comedian.  And I’ve told other comics I feel this way, and they’ve brought up times they remember me handling difficult heckler situations really well, or how things going wrong don’t seem effect me.  I only remember how I feel inside, which is usually terrible.  But again, I need those moments of support.  Or just to talk to other comics about how great I am more often!!!  Hah!?!  Anyone!?  Fine…
But overall things are going well.  I’m gonna make it through all of Atlanta without sleeping in my car, so that’s great.  It’s a really fun scene here, with a lot of open mics with audiences.  If you were a big deal, you could probably jump around to a lot of these shows and get good decently fast.  I still miss New York, but I feel like I’m getting my sense of fun and confidence back, which I felt I lost when I bought a car and just drove away.
Right now I’m trying to decide where to go next.  I was initially thinking Chicago, but San Francisco is somewhere I time and high-paying app-based jobs.  And I’m also thinking of a complicated New York-Boston-Philly-DC combination which excites me.  I’ll figure it out soon, one way or another.